Pok Pok—the pounding sounds that a pestle made against a mortar during the making of Som Tam (Thai green papaya salad)—is a rising restaurant empire in the United States.

A humble start in Portland, Oregon, Pok Pok has expanded to New York City, the culinary capital of the United States.

Recently, renowned food writer Francis Lam wrote a fascinating piece on the New York Times and described Andy Ricker’s arrival to New York as “…the Beatles were about to touch down at Kennedy.”

Pok Pok wings are legendary and much celebrated in the foodie world; in fact, it’s the single commodity that has pretty much launched the growing empire of Pok Pok.

I have never been to the original Pok Pok, nor have I been to the newly opened Pok Pok New York.

But I have long wanted to taste these famous wings.

My friend Brian L, a Portand resident and mega foodie once told me that those Pok Pok wings were addictive and absolutely delightful.

If I can’t make it to any of the Pok Pok restaurants, I have to try making it.

Lucky for me, a quick Google search for Pok Pok wings pulls up Andy Ricker’s recipe, published on the Food & Wine magazine.

Named after the Vietnamese chef who created this recipe, these Pok Pok wings are called “Ike’s Vietnamese Fish Sauce Wings.”

I glanced through the ingredients and method.

It was simple enough to make, so out I went gathering the ingredients, marinated the wings, deep-fried and glazed with the sauce.

As I have mentioned, I have never tried the real Pok Pok wings, so I could only imagine they would taste better than my adapted version.

The wings are crispy, deeply flavorful, a tad salty but sweet at the same time, with the brilliant garlicky aroma and flavor from the deep-fried garlic.

The only thing that I felt iffy about was the the fish sauce marinade, which is re-used as a glaze and tossed with the chicken wings before serving.

It was a little disturbing to me, even though the sauce is boiled, hence there is really no hygiene concern.

I have provided an alternative method in my Pok Pok wings recipe below.

Now that I have tasted the goods, I just can’t wait for the Pok Pok cookbook.

I know it’s going to be great, and even more so because my good friend Austin Bush is the food photographer of the cookbook.

This recipe is only 368 calories per serving. 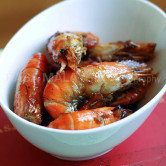 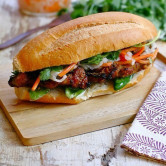 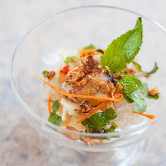