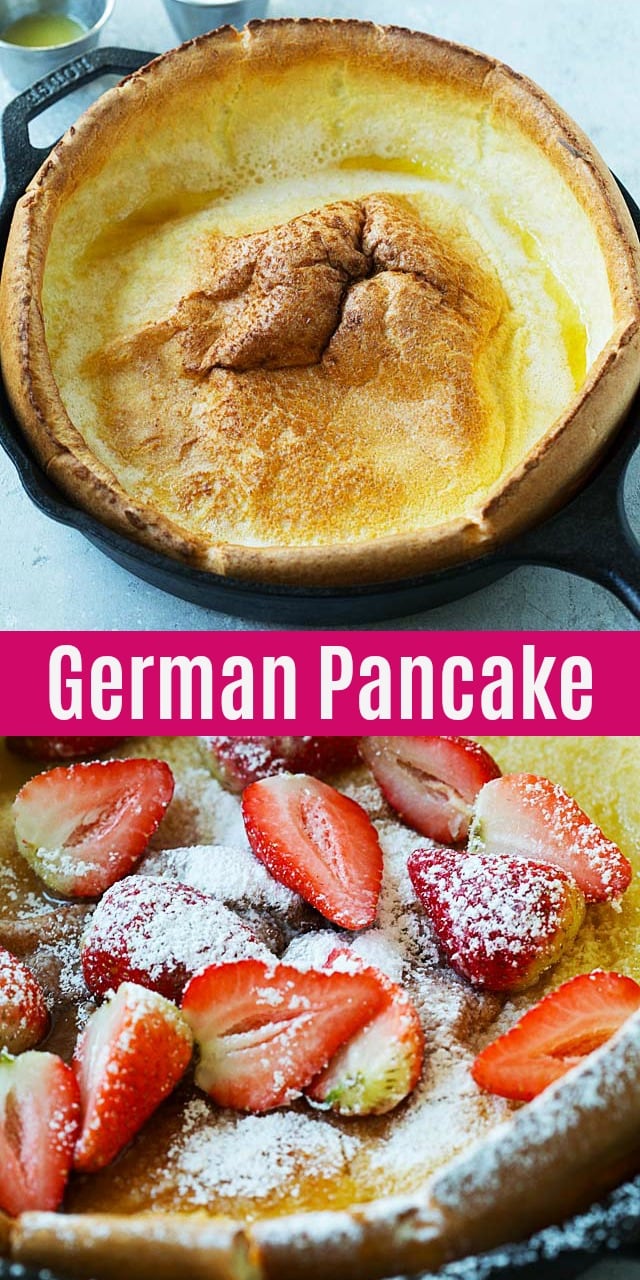 How Do You Make German Pancake?

German Pancake is an oven-baked pancake, usually made on a cast-iron skillet on stovetop and then finish off in the oven.

Contrary to its name, German Pancake is actually an American recipe, and its origin is in the United States and not Germany.

Is German Pancake the Same As Dutch Baby?

German pancake is basically the same as Dutch Baby or Dutch Baby Pancake.

The reason why it’s called Dutch baby is because German is Deutsch and the sound is similar to Dutch and it was probably misspelled as Dutch.

Either way, German pancake originated from Seattle, Washington in the first half of 1900, according to Wikipedia.

When I was in Netherlands recently, I certainly didn’t see any restaurants selling Dutch Baby!

Fluffy German Pancake in the Skillet and Oven

Homemade German pancake is a two-step process. You start off on the stove top, using a skillet such as a cast-iron skillet.

After that, you bake the pancake in the oven at high heat. The end result is fluffy, airy and puffy German pancake.

It’s amazing what a few ingredients could make magic with intense heat and baking in the oven. The ingredients of the batter are very simple:

Additional ingredients can be added to the basic batter, for example: salt, sugar, melted butter and vanilla extract. But at the very core, German pancake calls for only 3 key ingredients above.

It’s quite magical what the batter can do in the oven. You have to make it and see it with your own eyes to believe it!

How Do You Serve German Pancake?

German pancakes are mostly served sweet. There are many ways to serve them; you can serve them with melted butter, powdered sugar, buttermilk syrup or maple syrup.

Toppings such as berries are great addition to the fluffy German pancakes, for examples: strawberries, raspberries, blueberries, blackberries, or a combination of different berries.

Lower in Carb and Calories

I had previously shared a Dutch Baby recipe, but this German pancake recipe is easier with less ingredients.

Both yields amazing and delicious results. This German pancake recipe is definitely lower in carb and butter, making it healthier and lower in calories.

This recipe is only 229 calories per serving.