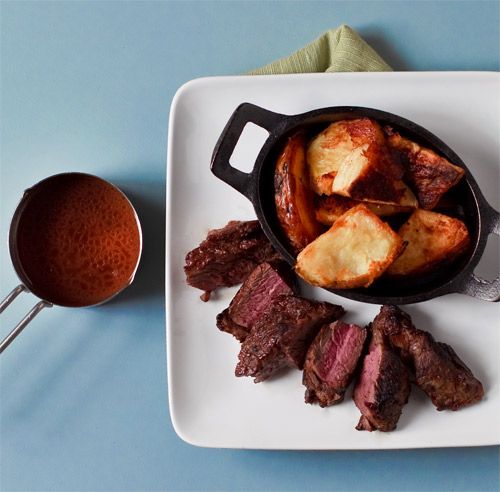 I am not a big meat eater, in fact, I don’t even eat red meat. Elk backstrap is certainly a very exotic ingredient that I wouldn’t know how to prepare, and that’s why Matt of Wrightfood and I thought it would make a wonderful guest post on Rasa Malaysia.

I first discovered Matt’s wonderful blog many months ago and was instantly hooked. Matt makes really great and sophisticated seafood dishes (you all know how I love seafood) that look like they came out of Michael Mina’s kitchen. Please welcome Matt of Wrightfood as he shares with us his elk backstrap recipe and the story behind it.

It’s really refreshing–and new–to have a non-Asian recipe on Rasa Malaysia; I hope you enjoy this guest post as much as I do.

I have been waiting a little bit to do this recipe. A couple of months ago now Danika’s Dad got a call from a friend saying that he was going elk hunting, and would Matt like some of the meat if he got anything.

To be honest, I didn’t have my hopes up. Any time Danika’s dad goes hunting with this bloke, they don’t exactly come back with a truck load of meat. They tend to come back slightly fitter than when they left, and somewhat hungry.

Whether this elk was sleeping or not, I have no idea, but somehow he managed to wind up getting shot… (follow the story and get the recipe after the jump)

A quick phone call to me from Danika’s Dad, a quick call back to his friend,and it was setup. I had no idea what I was getting at the time – I was hoping for some decent cuts, but er, free is free, and I will take what I can get! Thankfully I got some great cuts – a backstrap, and a top and bottom round.

I am going to make the rounds into some salumi (more on that later), but the backstrap needed a different approach – this is a really fine eating cut.

Things started to get interesting thanks to my twisted sense of humor. I was talking to Danika’s mum about the elk, and she happened to mention that she hated elk (that is refining the phrase she used somewhat, in case delicate eyes are reading this blog). Ohhhhhh dear.

Juniper berry is a favorite flavor of mine with any game. Oddly enough it isn’t actually a berry, more a seed. It’s flavor is pretty hard to describe… it is a little sharp, somewhat floral, but also a little earthy.

There, that doesn’t really clear that up does it. The outside of the “berry” can be somewhat flavorless, so you need to smack it hard with the side of a knife before using – just a little crush.

Now, it still being winter here in Seattle, I still have a complete crush myself on roasted root vegetables. Turnips are my vegetable of choice, along with parsnips too.

You can add a few potatoes in the mix too, and I won’t exactly be annoyed either. It just happens that with the sauce I was planning, some of the sweet root vegetables would be a nice compliment – the juniper/red wine reduction might end up a tad sharp, so some sweeter veg would work well me thinks.

There is one thing that I try and keep some of in the freezer. Heck, it can stay frozen for, er, almost ever. LARD. Yes folks, the good old rendered pork fat.

I am sure for many that the idea of lard makes people run straight to the gym, or their cardiologist, but it gets an unfair wrap. It’s fat profile is up there with olive oil in terms of health, and is actually better for you than butter. Sure, go eat your hydrogenised fat marg, and I’ll eat my lard.. I can tell ya who is going to see the cardiologist first, and it ain’t me.

Lard happens to be a great fat to roast with. Almost as good as duck fat, which is almost as good as goose fat. It results in very flavorful, very crisp roasted veg… and that is what we all want.

Plus, it makes your fingers smell great when you work with it. Rumor has it that people would smear it on themselves to stay warm through the winter (way back when).. you ask me, they just invented perfume.

So how is the backstrap cooked? Well, I treated it like a good steak. I cut it into medallions, no less than an inch thick. I heated up a cast iron pan until it was really darn hot.

You can now either turn the heat down, and finish cooking in the pan, or put them into a roasting pan, and finish in the oven. I opted for the later, since I had a fair few medallions to cook. You want to make sure you cook this medium-rare – overcooked and it is just going to be a chewy mess, since this is a really lean meat.

The sauce is dead simple. In a small pan I combined a couple of glasses of red wine, a diced shallot, the crushed juniper berries, some black peppercorns and some thyme.

Enough said. She now likes Elk. And yes, I did tell her what she just ate after the meal.

This recipe is only 602 calories per serving. 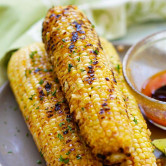 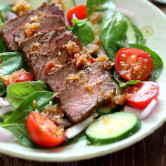 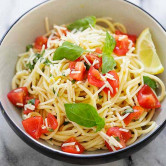 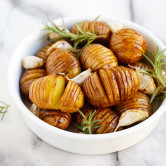